What is Male Pattern Baldness?

Male pattern baldness is a form of hair loss in men caused by genetic and/or hormonal factors. It is easily the most common cause of men’s hair loss, and will affect more than half of all men by the time they reach their 50’s.

Even though male pattern baldness is more frequent in men who are middle-aged and older, it can happen at any age. Many guys will observe early signs of this condition in their 20’s and 30’s, usually as a receding hairline or a thinning of hair.

If you’re beginning to notice a hairline that’s gradually retreating, or an increasing amount of hair in the drain after a shower, male pattern baldness might be to blame.

Despite commonly-held beliefs to the contrary, things like wearing a hat or using certain shampoos or hair care products haven’t been shown to increase the likelihood for developing male pattern baldness.

Of course, it’s all-too easy to go into full-blown freak-out mode when you start to notice you’re losing your hair. The good news is that there are quite a few options available that can help you to keep the hair you have, and even regrow the hair you’ve lost.

Also, hair loss due to male pattern baldness can happen very gradually. You may not even notice any signs of hair loss for a long period of time, then suddenly one day you notice it staring back at you in your reflection: the tell-tale signs of hair loss.

For most guys, the first sign of hair loss is a receding hairline. Male pattern baldness is the culprit behind the typical “widow’s peak”, or that  M-shaped hairline where the corners are receding more than the front of the hairline.

Hair Loss at the Crown

Hair loss at the hairline isn’t the only form of male pattern baldness that men can observe, however. If you’re a prime candidate for male pattern baldness but you don’t notice a receding hairline, you could very well be experiencing a thinning and loss of hair at the back of your head, near your crown.

Since it’s not as easy for guys to spot this type of hair loss in the mirror, it frequently goes unnoticed until it’s at a more advanced stage. The simplest way to check for yourself is by using a handheld mirror, or just take a photo of the back of your head with your cell phone.

A general thinning of hair, called diffuse hair loss, or diffuse thinning, is a type of hair loss that results in an overall thinning of the entire scalp, without there being any noticeable issues with your hairline or crown.

Even though it occurs less frequently than thinning at the hairline or near the crown, diffuse hair loss typically ends up being due to male pattern baldness. Generally, you can spot this form of hair loss best under bright lighting, or when your hair is wet.

Male pattern baldness is caused by a genetic sensitivity of the hair follicles to the hormone DHT (dihydrotestosterone). (3)

DHT is a male hormone (aka, androgen) that is produced by the body naturally. DHT is actually a byproduct of testosterone, which means that a portion of the testosterone in the body is regularly converted into DHT.

DHT is crucial for the development of your male characteristics. We’re talking manly things like body hair, a deeper voice, increased body mass, sexual development, and more. Unfortunately, DHT is also the primary cause for male pattern baldness.

DHT causes hair loss by binding to hair follicles in the scalps of genetically predispositioned men. As a result, the hair follicle eventually shrinks, causing hair growth to slow, and ultimately preventing the follicle from producing new hairs.

For those lucky enough, this genetic predisposition to DHT-sensitive hair follicles doesn’t exist, and they experience little, if any, hair loss. On the other hand, some men are born with a high sensitivity to DHT, and can experience hair loss very early on, as early as their early 20’s, or even as a teenager.

Bottom line: The greater the sensitivity of your hair follicles to DHT, the higher the likelihood you’ll experience hair loss.

Factors That Increase Your Risk for Male Pattern Baldness

Bald Can Be Beautiful

As we have learned, whether or not you develop male pattern baldness comes down mostly to your genetics. Even though there is currently no cure for this type of hair loss, there are many alternatives available that you can choose from to help mitigate the problem.

Of course, if you’re the type of guy who’s not hung up about it, you can just accept it and move on. Plenty of men prefer to shave their heads or keep a close-cropped haircut. If you can wear it like you own it, sporting the bald look can be a great choice. 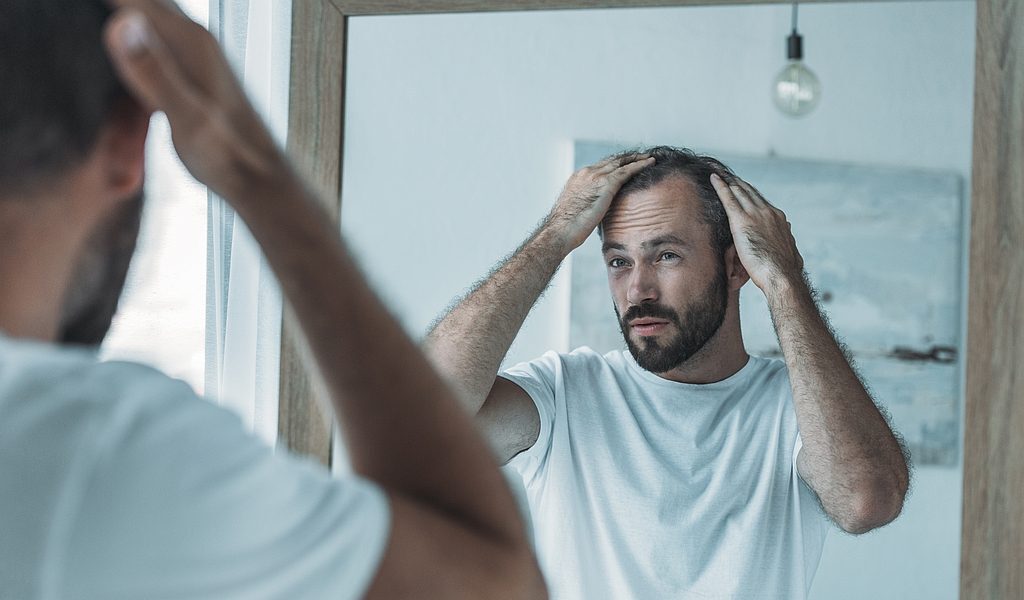